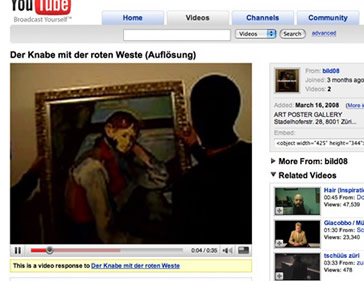 Synopsis:
In the largest art theft in Swiss history, Paul Cezanne's "The Boy with the Red Vest" (value: almost 100 million francs) was stolen. Shortly thereafter a video surfaced on YouTube: two masked men hung the missing picture on the wall. Immediately the video of the two masked men spread across the Internet and became THE topic of discussion in all media. At the highpoint of interest the secret was revealed: the Art Poster Gallery, with thousands of genuine art prints, was behind the guerrilla action. In a short time it became the most well-known art shop in the country.