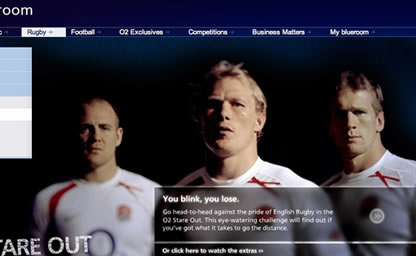 During the Rugby World Cup, O2 continued its support of the England Team with a high-profile ATL campaign called Never Surrender. We were asked to come up with an online campaign encapsulating this 'never give up' attitude. Our solution was a ground-breaking interactive game called O2 Stare Out. Rugby fans were challenged to a stare out competition via their webcams with three of England's top stars; Mike Tindall, Josh Lewsey and Tom Rees. The rules were simple: you blink, you lose.