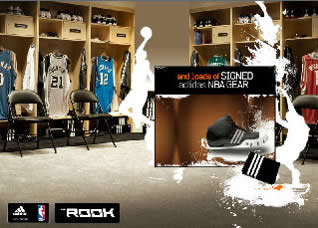 Challenge:
Traditionally adidas invites athletes to Asia in what is called the Player Tours. In 2007 adidas wanted to activate hundreds of thousands of Asian basketball fans in what they called the Digital Player Tours. This meant we needed to provide a digital platform that got users closer than they ever could to these athletes, help them elevate their game and create the biggest ever digital campaign for adidas in Asia.

Solution:
We created "The Rook", a first person, full motion digital video branded game that allowed users to experience what it is to play their first rookie year in the NBA. During this 5 week journey, users played the game they love with a team of athletes, helping them elevate their game and truly live, breathe and feel the NBA life.

Results:
In 5 countries, over 5 Million users accessed The Rook, over 240,000 users played for the chance to win exclusive VIP tickets the 2008 All-Star Weekend, and spent an average of 20 minutes per visit, playing The Rook.